We arrived on time in San Francisco and had a good breakfast on the airplane. We ended up in the back of the queue for Passport Security and our bags were waiting for us when we got through. We had declared food and wood so we went through the Customs and Agriculture but everything was OK.

The Air New Zealand check-in counters were not open for another three hours so we put our bags in a holding area and caught the BART into the city. Buying the tickets from a machine was a challenge because we had to buy a ticket for each person. 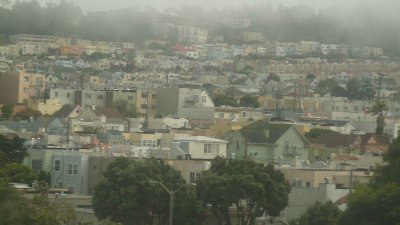 The BART train went through tunnels but also above ground so we saw some houses. The west half of San Francisco has fog year round because of the ocean and the bay!

On the train a friendly man gave us suggestions as to what we could do for a few hours but we had to watch the time. We got off at the Powell Street station and climbed up the stairs to the street. The first highlight was the turntable at the end of Powell Street which is used to turn the cable cars around. 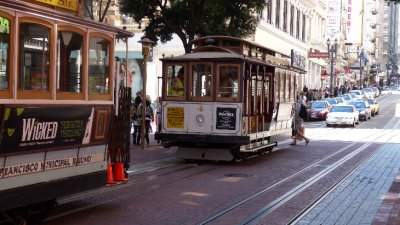 We walked up Powell Street for a few blocks then headed east. After walking in a circuit we went back to Powell and had a light meal at Burger King watching the trams go by. We caught the BART back to the airport, collected our bags, and checked them in.

We had time to look around the departure hall where several art pieces were on display.We found a wall covered in tiles about 10cm X 10 cm. 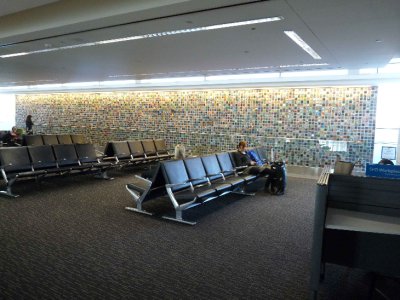 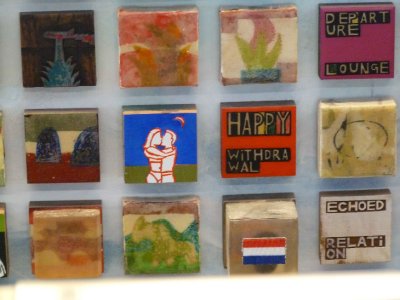 We found one with the dutch flag!

Once again we went through Security where they had a good look at the coffee machine and scanned it twice. We walked towards our gate but sat on some very comfortable chairs near the gate, because we were early. A few of us had a catnap because it was about 04.00 Netherlands time but 19.30 USA time. We also looked at some duty free shops while we waited.

Our flight left on time and we were all pleased to have a video/TV screen each again on the Air New Zealand 777. It was a 12 1/4 hour flight, and we all tried to sleep as much as possible. Emma and Shirley watched the Anne Frank movie which was more meaningful since we had been to see the house where the Frank family hid.