Karen arrived about 9am and after coffee, we got into the 2 cars and headed for Amsterdam. Using the TomTom navigator, we drove to a suburb of Amsterdam and parked the cars. We walked to the Duivendrecht station and bought some StrippenKaart, a flexible ticket which allows you to decide how many zones you are travelling. We boarded a metro tram heading for Amsterdam Central station. 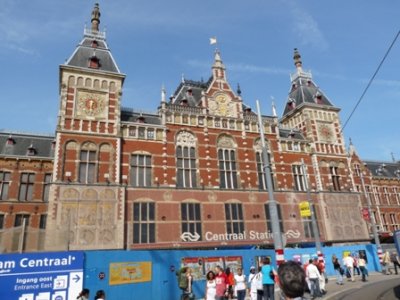 Like Christchurch if you use a ticket within an hour, you can get on another tram or bus so we hopped on a rather modern tram and zoomed over to the Concert Gebouw, taking photos as we went. 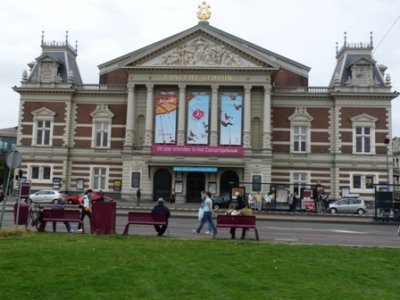 The buildings in the centre of Amsterdam are old, very dutch, and have amazing carvings on them. Several buildings were under restoration and have pictures of the building on the shroud which hangs on the scaffolding. The building looks less unsightly and you can see how the building would look.

Our hour was not up, so we hopped onto another tram taking us over to the PrinsenGracht. We walked along it, taking photos of various additions on houseboats until we got close to number 263, where Anne Frank, her family and friends hid for two years. 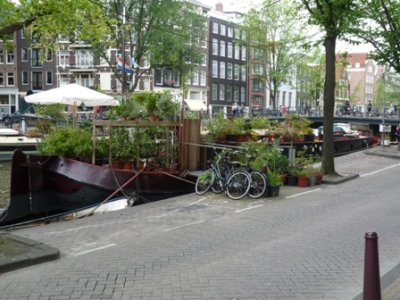 Look at all those plants on the houseboat

The queue for the Anne Frank House museum was 1 1/2 hours long we were told, but it was worth the wait, and it is a very well set out museum. You walk through in one direction, and chronologically follow the course of events that the Frank family experienced. We were not allowed to take photos inside.

On the way to the next museum, we bought the girls a t-shirt each.

We arrived at the second oldest museum in A'dam, Ons Lieve Heer in 't Solder, Our Lord in the Attic. Hundreds of years ago when Catholics were not allowed to have Masses in churches a man bought three houses in a row, used the first two floors for his home, and used the top three for a church. People would come from miles away for Mass. The local mayor and police knew about it but so long as it did not look like a church and nothing could be heard, they turned a blind eye and ear! in the 1800s it became a museum and paintings, statues, chalices, monstrances, robes, etc have been added. We lost count of the number of spiral staircases, but Karen counted 25 ladybirds dotted around the museum. The dutch word for ladybird is OnseLieveHeerbeestjes. 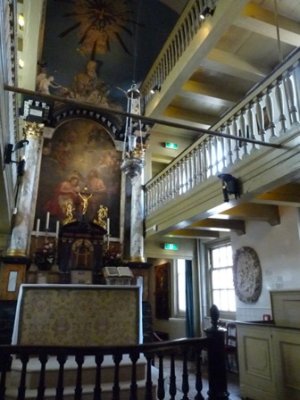 Interior of the church in the attic

We wandered back to A'dam Central Railway Station, down the escalator, on to the metro tram, and back to the cars. We had just got it when it began to spit, and on the way back, we had torrential rain for a few minutes. It was not raining when we got home but as we ate dinner we heard a few big booms of thunder. In the newspaper the next day an article said the lightning had disrupted some trains and traffic in various parts of the country.