We have arrived safe and sound in the Netherlands after a good trip.

Thanks to the transport team who picked us up and took us to Chch airport, we were on time but the plane was late leaving. Rosemary coped very well with her first flight, and we were met in Auckland by Shirley's sister Jo who shuttled us to the international terminal. It was muggy and had been raining.

After finding Jo's husband Tim, we had a quick farewell and headed through security to departure. We had a great flight on the Air New Zealand 777, we each had our own video screen with movies, TV, music and games to choose from. The girls were kept amused on the 13 hour flight, and the meals broke up the time. 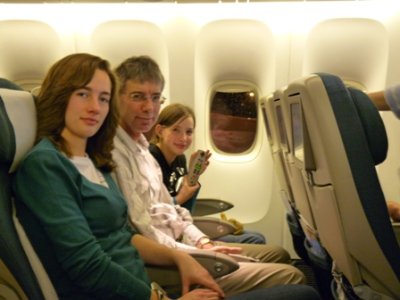 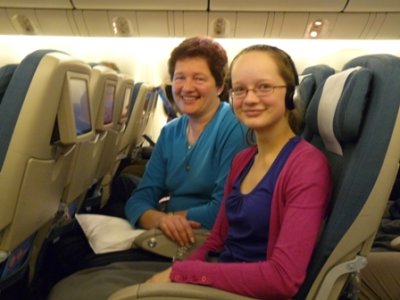 We had less than 3 hours to get from the Arrivals at San Francisco to the KLM check-in and departure lounge but we made it in good time and had a 20 minute wait to board. San Francisco was warm, muggy and smoggy. Compared to the Air NZ 777, the KLM Boeing 747-400 was old and quaint. Just eight music channels to pick from, and everybody watched the same movies on shared screens. We had hot towels before meals and the service was just as friendly as on Air NZ. What we did notice, was that all the announcements were in Dutch and then English. It was as if we were already on dutch soil. Nine and a half hours later, we arrived at Schiphol.

After disembarking, we regrouped because Jennifer & Chris were seated 25 rows behind us at the back of the plane, then headed for the baggage hall. When we got there we could see a group of arms waving at us, and our bags came through very quickly. Nothing to declare, and we were through - hugs all round and then on to Shirley's cousin Anita & her husband Piet's house for coffee with about a dozen relatives. Gezellig.

After dinner we went for a short walk to see a canal and get some fresh air. The girls have gone to bed very tired but they have all coped very well with the 31 hour trip. They are sharing the top attic room on the third floor of the house. We will add photos next time.