Ruben (son of Oom Koos and Tante Toos) picked us up about 8:45am and took us to church with Oom Koos and Tante Toos. We wrote a message in the intentions book for Chris's Uncle Ivan who had just passed away, so during the service the priest welcomed visitors from New Zealand and said a prayer for Uncle Ivan. Although the mass was all in Dutch we could follow most of it because it followed the standard Roman Catholic format. After church there was coffee and biscuits next door.

We went for a walk around the streets near Ruben and Cintia's home, and ended up at a little kinderboerderij (children's farm) where there were lots of goats and other animals for the kids to pet. 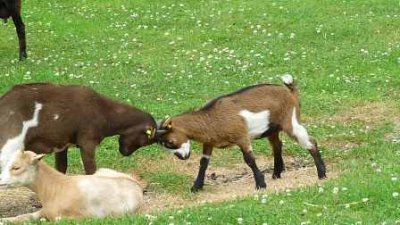 Then we went canoeing at the Canoe Club with Oom Koos, Tante Toos, Hans and Henriette, Sabine, Larissa, Madelon and Jeroen, Ruben and Cintia, Simon and Kevin. Hans is a member of the club and an experienced canoeist. We took two Canadian canoes for a trip on the canals. Hans, Chris and Jennifer were in one canoe. Henriette, Shirley, Rosemary and Sabine were in another canoe. Larissa, Madelon and Jeroen followed in single kayaks. We rowed out of the harbour, along the Oude Rijn for a short distance, and then along another canal through the Heineken Beer factory and into the countryside. The Oude Rijn was a bit rough with quite a few motor boats but Hans steered us safely through it. The canals in the countryside, however, were almost mirror flat and very quiet. It was a beautiful day. 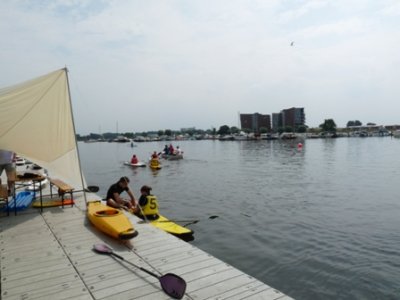 Canoeing at the Canoe Club, Leiderdorp 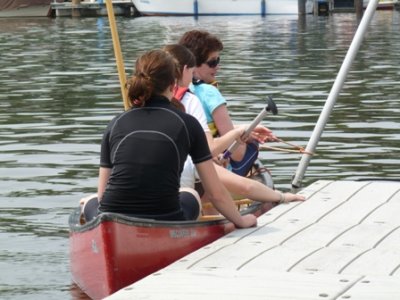 Sabina, Henriette, Rosemary and Shirley in a Canadian canoe at the Canoe Club, Leiderdorp

When we got back to the Canoe Club, we had a barbecue tea on the pontoon - chicken kebabs, spare ribs, sausages, speklappon (bacon), salads, bread, wine and juice.

After tea, Jennifer, Kevin and Simon went swimming until about 8pm. Under Hans´ watchful eye, Jennifer learned to roll her kayak over and get safely out. 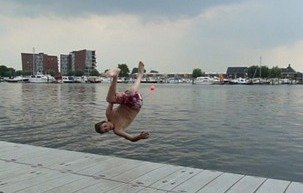 Kevin diving in at the Canoe Club, Leiderdorp

hi rosemary & family,looks like you guys are having fun!