The day started with rather persistent looking rain but by midday it had eased to light misty drizzle so we headed for Archeon with jackets and a handful of umbrellas. By the time we paid and started to walk around it was dry and the sun was shining by the time we left! Anita's oldest brother Joost came with us and Karen joined us as well.

It is set out in a chronological order starting from Prehistoric through to Late Middle Ages. Each age had buildings of the period and people dressed as they would have been at that time, doing activities of the period. 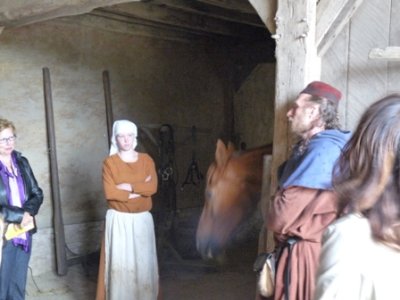 At the pot maker's in the Middle Ages, the girls made a felt bracelet and wrote with a quill and ink. 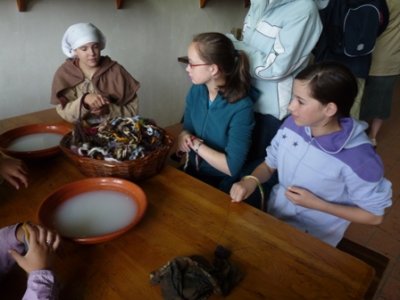 In the neolithic age, we saw a child with a toad in a pot, which was his toy for the day!

In the Roman time, we watched a Gladiator fight and had a roman meal afterwards - a choice of meat and a slice of thick bread with herbed butter. 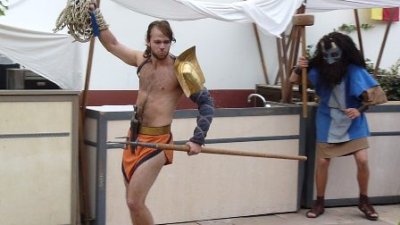 Gladiator about to strike

We went home and had hot savouries and soup for dinner. We enjoyed Joost's company, and were pleased we had been through Archeon. The girls enjoyed because it had activities that they could do, and it was interesting to talk to the 'people of the time'.