The rain was heavy on and off during the morning, but cleared by lunch time. After breakfast, Piet dropped Rosemary, Emma and Shirley in town to visit more bead shops.

In the afternoon we drove into Leiden, parked the car in a car park which has a free shuttle bus service that we used to get to the Hortus Botanicus.

The Hortus Botanicus is the oldest botanical garden of the Netherlands, and one of the oldest in the world. In 1590 the burgomasters of Leiden gave permission for the young University of Leiden to establish a garden for the benefit of medical students. The famous botanist Carolus Clusius was appointed the first prefect. The original garden set up by Clusius measured only about 35 by 40 metres, but contained more than 1000 different plants. The Clusius Garden is a re-creation of Clusius' original garden, based on a plant list dating from the end of the 16th century. 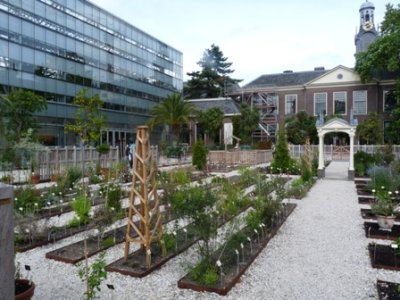 The Hortus Botanicus is known for its large collection of tropical and sub-tropical plants. The garden is also designed as a scientific and teaching collection, with many beds dedicated to specific groups of plants, all beautifully labelled and described.

The Winter Garden is an impressive 3-storey hothouse that houses collections of carnivorous plants such as the Pitcher plant and the Venus Fly Trap, giant palms and other tropical plants. 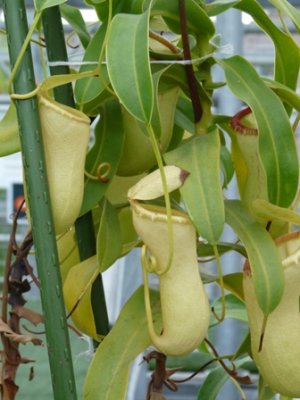 A carniverous North American Pitcher plant of the genus Nepenthes. In this species, the pitcher forms at the end of a long tendril that extends from the end of a leaf. 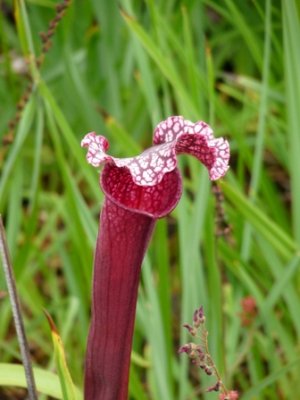 Species of the carniverous North American Pitcher plant of the genus Sarracenia. Insects that fall into the plant never leave: the inner wall is as slippery as glass.

The Hortus Botanicus is also famous for its collection of giant Victoria amazonica water lilies. The leaves of these lilies can be more than a metre across, and can support a small child. 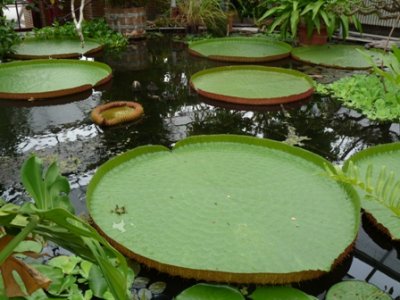 Leaves of the giant Victoria amazonica water lily. Gold-coloured 1- and 2-euro coins have been tossed onto the leaf in the foreground. Can you see them? 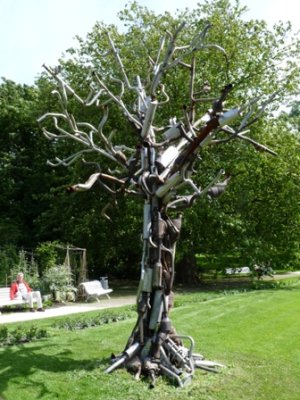 There are more photos from the Hortus Botanicus in our photo gallery. Click on More photos... in the navigation bar on the right to see them.

In the evening we went to Petra and Jan's place for dinner - nasi, noodles, satay kebabs, and seroendeng. We met Vincent, their son, and his girlfriend Kelly. Their daughter Ester was in Rotterdam, playing violin in an orchestra accompanying George Benson in concert.