We all had a sleep-in this morning, except for Anita who had to work in the morning. We drove over to Piet and Anita's old house to check the emails and write our first DVD of photos.

After lunch we visited Shirley's uncle, Oom Henk and Tante Ploni, and their three grown-up sons Philip (who looks like Shirley's brother David), Ronald and wife Jeanette and children Steven, Maaike and Sofia, and Patrick. We stayed for dinner - oxtail soup with vermicelli and meat balls, rolls with kaas (cheese) or vleeswaren (cold meat), krentebollen, tea, coffee and bitter koekjes.

Oom Henk can't speak English and Chris can't speak much Dutch, but they spent much time together "discussing" one of Oom Henk's hobbies, Meccano, looking at models and gears and pouring over old Meccano catalogues.

On the way home we drove over a street called the Lange Brug. It looks like a narrow cobbled street, but it's actually an old canal that has been covered by a bridge for its whole length.

Firstly, of course, it's flat.

Secondly, there are the famous windmills or "molens". Even in the centre of Leiden there are windmills, like the "De Valk". In the countryside you also see modern windmills for power generation. There has been a lot of discussion in New Zealand about the environmental benefits and adverse affects of windmill farms as sources of renewable energy. In the Netherlands it is not uncommon to see groups of 2 to 6 power generation windmills scattered across the landscape. Sometimes the lower few metres of the towers are painted in shades of green from dark up to light, to help the towers blend with the scenery. 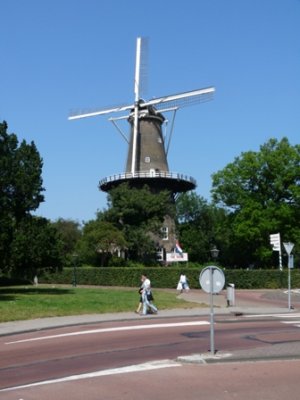 Third, many roads and paths, especially in the older areas, have cobblestones rather than tar seal. This makes road and utility works easier because you just lift up the paving stones, do the work and then re-lay the paving. It also makes biking a more invigorating experience!

Fourth, there are canals everywhere. Even in the city centre there are little canals with streets either side, and bridge after bridge after bridge... A number of bridges on the main canals open, like Tower Bridge in London, to let larger ships go through. When they open, traffic stops and your trip can be delayed for some time! 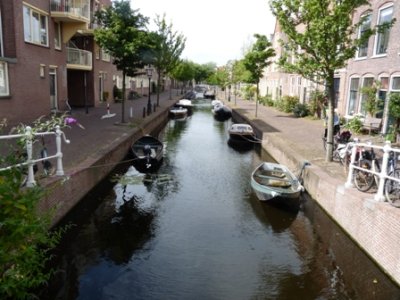 A typical canal scene in Leiden

And finally, there are the bikes. Everywhere. There are so many bikes that they have bike stands at every shopping precinct and there are special bike parks where for about 0.5 euros you can park your bike in a secure, manned facility for the whole day. 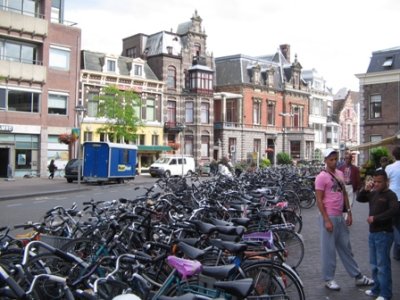 Bikes parked in the center of Leiden 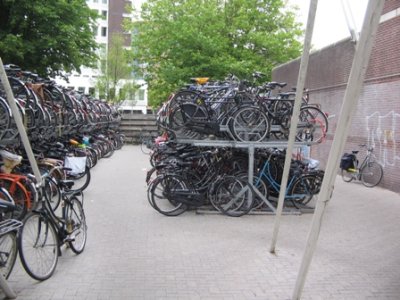 A bike park in Leiden